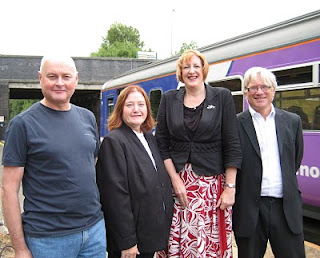 Work will soon commence to improve Bryn Station thanks to a capital investment by Greater Manchester Integrated Transport Authority (GMITA).

Yvonne Fovargue MP alongside fellow Greater Manchester MPs met with GMPTE at a meeting in parliament (16th June) to discuss rail infratructure improvements and pressed the case for improvements to stations in Makerfield.

The Makerfield MP contends that the Metro is a net contributor to GMITA and a greater share of resources should be allocated to rail infrastructure improvements in the area.

The investment will deliver CCTV, help points, customer information screens and public address systems as part of a rail improvement strategy. Orrell Station has already benefited from a similar investment.

Yvonne said, “Bryn Station needs this investment and this is good news for passengers, but there is still much more work required to make Bryn Station a more welcoming and pleasant experience for rail users.”

Cllr Ann Rampling said, “During the recent local election many people told me that the station is an eyesore crying out for major investment and were particularly unhappy with access for people with disabilities so I want local people to get behind the petition that Trevor Allen and I have organised.”