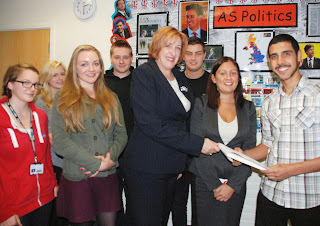 A packed audience of students at Winstanley College met with Lisa Nandy MP and myself to discuss a wide  range of current issues.

The questions from students were diverse and we were very impressed with the level of engagement that Winstanley students showed in the discussion.

This now annual visit demonstrates that far from being apathetic, today's young people have a very good grasp of the issues facing the country and the global community.
No comments:

Wigan certainly has the running bug following the inaugural Wigan 10K so I hope runners will participate in the Run4ALife 5k on 29th September at the DW Stadium.

I joined race organiser's The Rotary Club of Wigan today to help raise awareness of the event and to encourage everybody to take part over a smaller distance and one that the whole family can undertake.

Whether you run or walk the course it promises to be a great day so don't delay - sign up today! 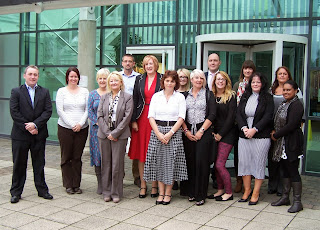 The nationwide CAMIAD programme is aimed at any professional who might have contact with debtors and this includes insolvency practitioners, accountants, solicitors, debt management advisers, bankers, college and university lecturers, social and welfare workers and even doctors.
No comments: 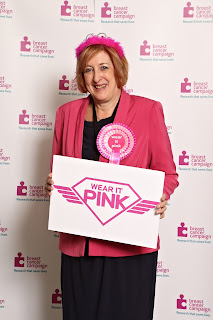 I joined the fight against breast cancer by raising awareness of Breast Cancer Campaign’s biggest (and pinkest) fundraiser, wear it pink day.

Over the last 10 years wear it pink has raised a staggering £23 million and on Friday 25 October 2013 people will come together in schools, colleges and businesses throughout the country to raise vital funds for Breast Cancer Campaign’s lifesaving research.

Every year in the UK around 50,000 women and around 400 men are diagnosed with breast cancer. Sadly 12,000 women and 80 men die from this disease. This is why we need to support Breast Cancer Campaign’s fundraising efforts so they can continue to fund research which will one day lead to a cure. So join me, wear something pink and donate £2, it’s really as simple as that.

Breast Cancer Campaign vitally needs the money raised from wear it pink for its researchers to have the best possible chance to find the cure.

To register for wear it pink and receive your fundraising pack visit here or call 0800 107 3104.
No comments:

With a year to go until we mark the centenary of the UK entering the First World War, I am encouraging constituents to consider applying to the Heritage Lottery Fund (HLF) for community projects to learn more about the First World War.

HLF is making at least £1million a year available until 2019 as part of the First World War: then and now programme for small, community grants.  It will provide grants of £3,000 to £10,000 enabling groups right across the UK to explore, conserve and share their First World War heritage and deepen their understanding of the impact of the conflict.

Successful projects will include:

I’m delighted that the Heritage Lottery Fund is making this money available to local communities. Like many areas across the UK, the impact of the First World War on the people of Makerfield was extensive. For those who want to find out more about its legacy or who wish to mark the Centenary, I would urge them to get in touch with HLF.