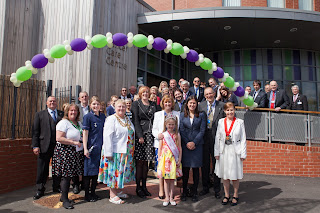 An award-winning endeavour by Wigan, Wrightington & Leigh NHS Trust (WWL), the Cancer Care Centre building has been operational for patients for just over a year and celebrated its first birthday in January. The building was made possible by a solid partnership between WWL, The Christie NHS Foundation Trust and MacMillan Cancer Support. It opened to patients in January 2015.

The purpose of the centre is to provide the people of the Wigan Borough a place where they could undergo chemotherapy treatment closer to home, rather than having to travel to Manchester. It cost £5 million to build and the ground-breaking development project was carried out by Barnes Construction.

I was delighted to attend this special event alongside Madam Mayor Cllr Sue Louden, former Mayor Cllr Phyllis Cullen and Lisa Nandy MP. There to officially open the building was Dr Andrew Wardman MBE, who has worked at WWL since 1988.

Also at the event, WWL was able to unveil its brand new Sensory garden, designed to give chemotherapy patients a place to relax whilst they undergo their treatment. Cllr Phyll Cullen was invited to open the garden, as her role as a donor to the centre has been crucially important in ensuring the project has been completed successfully.
No comments: