Now in its fourth year, the competition attracted entries from secondary schools across the constituency with all of the designs being carefully judged by myself.

The winning design has been sent to a number of distinguished people in the political world, including both the Prime-Minister, David Cameron and the Leader of the Opposition -  Ed Miliband. The card has also been sent to individuals across the public and private sector in the Wigan Borough including the Borough’s first citizen and Mayor of Wigan, Cllr Billy Rotherham.

The winning design by Luke Bollard, aged 15 incorporates the thumb print of a young cousin as Christmas Tree lights and reminds recipients that Christmas is a time for everyone, but especially children.

It was an absolute pleasure to present Luke Bollard with the winning prize.  It was a great design that has clearly hit the right note, so I’m sure people will enjoy receiving the card in the run up to Christmas.

I know everybody at St Edmund Arrowsmith High School will be very proud of him.

We had a fantastic response from local schools. Pupils clearly put a lot of effort into their art-work so it made my job of picking the winner extremely difficult. But I’d like to thank all of the children and their teachers for taking part.

I also handed out prizes to two runners up whose designs feature on the back of the card. 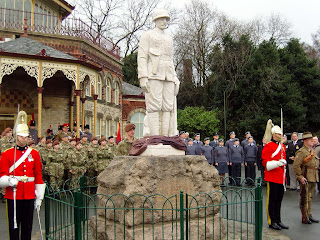 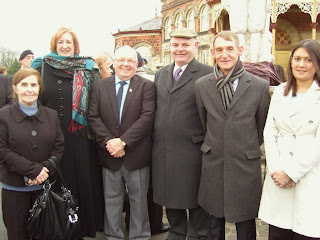 Thanks to our Posties! 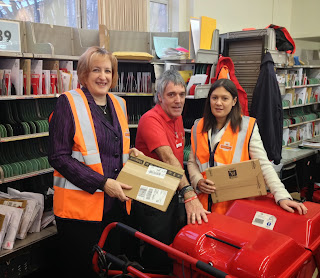 I joined Lisa Nandy MP in a visit to Royal Mail’s Wigan delivery office to pass on Christmas wishes and encouragement to the postmen and women at their busiest time of year.

We were shown round the office by local Delivery Office Manager, Paul Atherton, and were introduced to the postmen and women who are working hard sorting and delivering all cards and parcels in the Wigan area in the run-up to Christmas.

Postmen and women do such an important job at this time of year. I like to thank them for their efforts and wish them all the best over the busy festive period.

Paul Atherton told me that Christmas is the busiest time of year for Royal Mail. Posties pull out all the stops throughout the year to ensure mail is delivered quickly, but even more so over the busy festive period.

This year the recommended last posting dates for mail are:

‘Paws for thought' this Christmas! 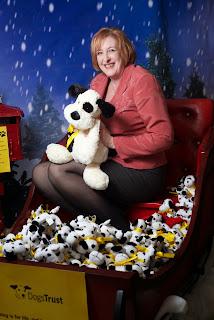 This week I attended an event in Westminster organised by Dogs Trust, the UK’s largest dog welfare charity, to raise awareness of its annual Christmas campaign.

The event celebrated the 35th anniversary of the iconic Dogs Trust slogan; “A Dog is for Life, Not Just for Christmas”. The phrase was coined in 1978 by the charity’s CEO, Clarissa Baldwin OBE, in a bid to highlight the issue of dogs being given as Christmas gifts, and indeed all year round, and later abandoned when the novelty wears off.

I was given the opportunity to take a festive Dogs Trust sleigh ride and meet a large number of furry friends. These pooches, however, were all stuffed toys – the only suitable kind of dog to give as a gift! Attendees also learned more about the charity’s annual campaign, which encourages people to pause and think carefully before taking on a dog, especially during the festive season.

A dog is a lifetime commitment and should never be bought on impulse as if it were a new television or a pair of shoes. This message is particularly poignant during the festive season, when people are buying all sorts of gifts on a whim without necessarily considering the consequences. I would urge anyone thinking of buying a dog or puppy as a Christmas present to ‘paws’ before doing so, and remember that A Dog is for Life, Not Just for Christmas.

Every year since 1978, Dogs Trust has campaigned to highlight the problems surrounding dogs being given as gifts at Christmas and all year round. The charity aims to curb this problem by educating people about responsible dog ownership and about the potential risks of buying pets on an impulse, be it in pet shops, directly through breeders, or online.

Dogs Trust is the UK’s largest dog welfare charity and cares for over 16,000 abandoned and unwanted dogs a year through its nationwide network of 18 rehoming centres.