Over 650 couples with children in part-time work in the Wigan Borough could lose around £4,000 a year from this April, following a change to tax credit rules being introduced by the government.

I am urging the Conservative-led government to reconsider a little-noticed change to tax credit rules which means thousands of families will lose all of their working tax credits unless they can significantly increase their working hours.

The change means that couples with children earning less than around £17,700 will need to increase the number of hours they work from a minimum of 16 to 24 hours per week or they will lose all their working tax credit of £3,870 per year.

Government figures revealed in parliamentary answers show 655 households in the Borough and 212,000 households across the country households could lose out. The cut will hit over 1550 children in the Borough.
A recent survey by the Chartered Institute for Personnel and Development found that one in five organisations have cut back on the number of hours that people work as a result of the economic downturn, with just 6 per cent increasing them.

This is a deeply unfair change from a government that is increasingly out of touch with parents feeling the squeeze and struggling to juggle work and family life.

Raising taxes and cutting spending too far and too fast has seen unemployment rise and the economy go into reverse, and many employers are cutting people’s hours. In this climate, very few people in part-time work will find be able to increase their hours by up to 50 per cent at the moment. And for a couple with children losing around £4,000 a year, or £75 a week, from this change could mean going out to work makes no sense.

It tells you everything you need to know about David Cameron and George Osborne that while the banks are getting a tax cut this year they are making life harder for parents in the squeezed middle who are working and trying to do the right thing.

This tax credits bombshell is now just a few weeks away. For many families here in Wigan it means going out to work won’t pay and they’ll be better off on benefits. That makes no economic sense at all. The government urgently needs to think again.

If neither of these applies, your Working Tax Credit will stop from 6 April 2012.
No comments:

Alcohol in pregnancy can cause a lifetime of problems for mums and their child. No matter how small the amount of alcohol consumed, there is a great risk of harming the unborn baby. Stay aware. Stay away from alcohol is the message of FASawareUK.

FASawareUK will be holding a Twilight Workshop on Thursday, 21st June at Platt Bridge Community Zone.

Founder and full time volunteer of FASawareUK, Gloria Armistead will facilitate the workshop which will provide awareness, information and education strategies. Download the flyer here. 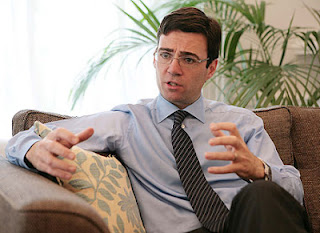 Andy Burnham MP today commented on the Drop the Health Bill e-petition as it passed 100,000 signatures.

“Tens of thousands of people have today sent a very clear message to the Prime Minister. They want him to listen and stop putting his political pride before the best interests of the NHS."

"Mr Cameron wants to legislate to turn our NHS into a free market. He is being reminded in no uncertain terms that he does not have the public's permission to do this. Nobody voted for this re-organisation and Mr Cameron promised it would not happen."

“Even though the petition has passed the 100,000 mark, I urge people to keep on signing. The greater the number of people who add their names, the more strength they will give us to speak out against it in the final Parliamentary battle."

"The 'Drop the Bill' call is turning into a deafening cry supported by patients, professions and even Members of Mr Cameron's Cabinet. It is a fight we can and must win!"

I will be joining Andy at a Wigan Borough Drop the Bill Rally on Friday, 2nd March at Ince Town Hall. Doors open 6.15pm. You can download the 'Drop the Bill' Flyer and distribute to friends, family and co-workers.
No comments: 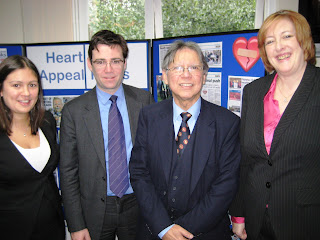 The Royal Albert Edward Infirmary's new state of the art Coronary Care Unit was officially opened today on Valentine’s Day, by Dr. Nayyar Naqvi, the man who has made his vision a reality. The £1.4m unit has been helped along by the public of Wigan and beyond, with donations to the Heart Beat Appeal being collected over the last two years. The new build has significantly improved patient facilities, with the ward being larger, roomier and much lighter than the old unit.

Guests included local MPs Lisa Nandy and Andy Burnham, the Mayor of Wigan Councillor Joy Birch, as well as members of the public who have all contributed to the Heart Beat Appeal.

The new Coronary Care Unit now provides much needed modernised facilities with increased bed capacity and the addition of a second Catheter Laboratory and associated Treatment Rooms, as well as support facilities for both staff and patients. The new reconfigured layout has significantly improved the work flow and overall environment previously experienced by patients and visitors to the unit. The financial investment into the refurbished and extended accommodation was completed in January 2011 at a cost of £1.4 million.
No comments: 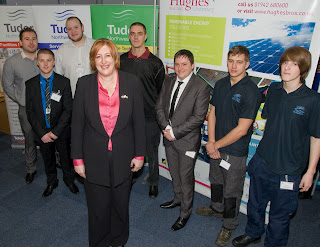 Local leaders met with apprentices past and present at the offices of Wigan and Leigh Housing this morning to review progress so far and ensure work can continue supporting the next generation.

They were told that Wigan Borough has one of the highest percentages of apprenticeships in the Greater Manchester area.

The breakfast meeting was attended by Deputy Leader of Wigan Council Cllr David Molyneux, and the chair of Wigan and Leigh Housing Neil Turner, as well as a number of business leaders. 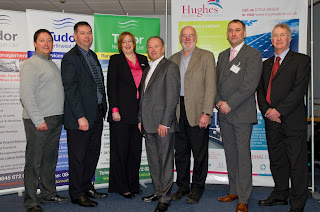 It was great to meet with the young apprentices today showing firmly that apprenticeships are a real and viable option for young people today. Over one million young people are out of work so we must redouble our efforts as a nation to do more to help local firms create the apprenticeship opportunities young people across Wigan & Leigh need.

It is to our borough’s credit that Wigan & Leigh Housing and its partners, Tudor NW and Hughes Brothers recognise that building up our skills base has a major role to play in boosting growth and providing life changing opportunities for our young people.

Neil Turner, former MP and long-term supporter of the apprenticeship agenda, said, “Wigan and Leigh Housing are delighted to host an event as a local business alongside two other local businesses: Tudor North West Limited and Hughes Brothers. We’re using the occasion to highlights local businesses’ commitment to providing apprenticeships for local people.”

At the meeting, Arthur Naylor of Tudor North West said his firm would be looking for new people under the scheme.  Mr Turner reaffirmed his commitment to the scheme by announcing that further apprentices would be taken on.

He added, “This compliments the work we are doing with Job Centre Plus in Wigan where their staff are now co-located with Wigan and Leigh Housing staff.  The housing company’s board and its staff remain strongly committed to providing the best housing service possible, and helping create a better borough”.

Deputy leader Cllr David Molyneux acknowledged the difficult economic climate but added, “I am delighted to see local businesses continuing to commit themselves to provide apprenticeships for local people.  These companies are clearly planning ahead to ensure that they have got a supply of new young talent to drive their businesses forward.  It is companies like these who are more likely to survive in these difficult times.”