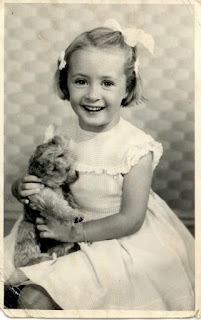 I have recorded my personal Jubilee Time Capsule memory and am encouraging local people to take part.

I chose my first memory of a photograph with my favourite Teddy called ‘Teddy 1’ taken in 1960.

The Royal Commonwealth Society’s Jubilee Time Capsule project is collating memories from the last 60 years across the Commonwealth. Memories that are uploaded do not have to be about Her Majesty the Queen or Royal Family.

I can remember the photographer encouraging me to smile only for me to say I didn’t want my photo taking. At this point my Mum steps forward telling me that Teddy 1 wanted his picture taken and would I hold him!

It holds happy memories of my childhood years.

The Jubilee Time Capsule is a great opportunity for local people to get involved in not only the Diamond Jubilee but also take part in the world’s largest online history project by uploading a memory and record a piece of their own personal history - a snapshot in time.

You can upload your memory here.
No comments:

This week, I have called for the Office of Fair Trading (OFT) to introduce the ‘power to suspend’ unscrupulous companies operating in the lucrative payday lending industry.

I have made a submission to the OFT’s Review of the Payday Lending sector including case studies from Wigan based Citizens Advice Bureau and the borough’s credits unions Unify and Welcome.

I have witnessed first hand the the rapid growth of the payday lending industry and over the same period the similar increase in the number of people seeking debt advice as a result of having not just one, but numerous payday loans, easily taken out and with limited affordability checks by the lending company.

I accept that there is a role for payday lenders to play in the finance industry, but I am calling for a much tougher approach to applying existing regulation as well as introducing measures to take account of the methods employed by the industry, such as instant online decisions and loans by text message.

My call for action includes:

• The OFT to be given the power to suspend companies from trading, which they are confident, have been in breach of current guidance.
• Raising the bar for entry into the industry, as it is currently too easy for these companies to obtain licenses to trade.
• The creation of a database of real time credit information to combat ‘spiralling debt’ faced by many consumers when multiple loans are provided to customers, by different companies and in a short space
of time.

The next two years will be an extremely difficult period as the transfer of powers from the OFT to the Financial Conduct Authority (FCA) takes place. This has the potential to create a ‘wild west’ style scenario of payday loans companies benefitting from the inevitable confusion and uncertainty in the cross-over period.

I do believe that the way the industry is currently operating penalises vulnerable consumers. Voluntary regulation has failed miserably and now is the time for the OFT to be given the power to crack down on the irresponsible actions of an industry making huge profits on the back of vulnerable and low income borrowers.
No comments:

I am backing a campaign to ensure victims and witnesses of crime are not made to suffer twice.

At least £21m of help for victims could be wasted if controversial government plans to hand control of budgets to police and crime commissioners go ahead, according to the charity Victim Support.

Even by the Government’s own estimate the costs of this form-filling would mean the loss of:

Victim Support is therefore calling on the Government to rethink plans which it believes are unworkable, damaging and dangerous and could abandon people when they are at their most vulnerable.
If implemented, the Government’s plans will also:

• Break up the existing network of nearly 7,000 highly trained Victim Support volunteers, which currently saves the taxpayer over £20m a year. Without this network, victims of large scale criminal incidents, the police and local authorities will all be less able to rely on consistent local support.
• Create patchy services for victims and witnesses. This –  and the Government’s desire to focus support on far fewer types of crime – means that some victims may miss out on any support.
• Reduce the money available to spend on victims and witnesses by £3m per year, by reducing Victim Support’s ability to fundraise.
• Divert millions of pounds to private sector firms – money which would be better spent on helping victims.
• Put the security of victims’ personal information at risk – with significant implications for the police who currently routinely share victims’ data with Victim Support.

Victim Support volunteers do an amazing job in Wigan. We need to ensure that those who are affected by crime get the support they deserve. That’s why I’m backing Victim Support’s calls on Government to rethink its plans.

Javed Khan, Chief Executive of Victim Support, said:, "It makes no sense to reinvent the wheel by asking police and crime commissioners to purchase services for victims. Victim Support has been successfully giving help to victims and witnesses for nearly 40 years. It is simply unacceptable that they could lose out on support to the value of £21m because of additional red tape and paper pushing."

“Getting it right for victims and witnesses should be about putting their needs at the heart of changes, not making proposals which have the potential to abandon them when they are at their most vulnerable.”
No comments:

The Tory-led coalition has forced through emergency legislation that will suspend the Sunday trading
laws in England and Wales for eight weeks this summer starting from 22 July.

Coalition MPs voted through The Sunday Trading (London Olympic Games and Paralympic Games) Bill last night, after just nine hours consideration and debate in both the House of Commons and House of
Lords.

In a break with the convention that MPs have a free vote on the issue of Sunday trading, Coalition
MPs were subject to a three-line whip, meaning all Conservative and Liberal Democrat MPs were
compelled to back the Bill. The shopworkers’ union Usdaw said the government’s decision to deny its
MPs a free vote reflected the shambolic way the issue had been handled and the failure of the
government to make a convincing case for the suspension.

I voted aginst the Bill and believe that the Government have failed to listen to shop workers and interested bodies like the voice of small retailers - The Association of Convenience Stores. Instead they chose to back a handful of large commercial interests who would prefer a permanent deregulation of Sunday trading.
No comments: