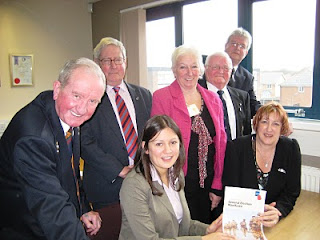 Labour’s parliamentary candidate for Makerfield has pledged to do their bit for Britain’s Armed Forces.

Yvonne Fovargue and Labour's parliamentary candidate for Wigan, Lisa Nandy visited the new home of the Wigan Borough Veteran Council (WBVC) in Platt Bridge and met with veteran leaders in the borough.

The Royal British Legion has called on parliamentary candidates to support the whole Armed Forces family. The manifesto sets out priorities for the next Government to improve conditions for the British Armed Forces past and present and their families. It encourages prospective parliamentary candidates (PPCs) to “do their bit” for Service Personnel and their families, the bereaved, veterans and dependants.

Mel Lee of the Ashton branch of the Royal British Legion said, “I am delighted that Yvonne and Lisa have pledged today to do their bit. This is a great way of showing their support for the whole Armed Forces family.

“Both the serving and ex-Service community need the support of politicians and our manifesto outlines practical ways the next government can help, and we hope that, if elected, both Yvonne and Lisa will give it serious consideration”.

Lisa Nandy said, “I was really pleased to get my pledge card from the Legion. I know the work they do for the whole Armed Forces family matters not just to me, but to so many local people as well. It’s so important we all get behind them and that’s why I had no hesitation in pledging to do my bit.”

WBVC have also launched a campaign to extend the eligibility criteria for the popular Veteran Lapel badge. Currently, a posthumous award can only be sanctioned if the widow/widower of the deceased veteran is in receipt of a war widows pension.

In practice this means that many widows/widowers miss out on the award of the lapel badge. Both Lisa and Yvonne have pledged to campaign to end this restriction so that widows/widowers can receive the badge.

Yvonne Fovargue said, “The lapel badge has been a tremendous success and it is a common sight to see veterans proudly wearing the badge as they go about their daily business."

“Wigan Borough Veterans Council have rightly pointed out the current restriction and we will campaign to extend the eligibility criteria.”

In the months ahead, the British people will make a big choice about the kind of future we want for Britain. A choice between creating a future that is fair for all, or a change that puts the recovery at risk, threatens public services and makes life tougher for families.

Today, Alistair Darling set out Labour’s choices in the budget.

In Makerfield like the rest of the country, the recovery is still in its infancy. We believe, as do economists and businesses all over Britain and the world, that the worst possible course to take now would be to slam on the brakes through the cuts this year proposed by the Conservatives. So we will keep helping businesses, families and the unemployed until recovery is secured.

That’s why I’m pleased that the Budget extended our ‘Time To Pay’ scheme, which between November 2008 and February 2010 deferred taxes worth a total of £20million for over 1,300 small and medium businesses here in Wigan.

I believe that people in Makerfield want a government that is on their side and fighting for a fairer future. So we will put economic growth first, to ensure that people have the skills and jobs they need to succeed in the world and their children have the opportunities to get on and get ahead. That is why we continue investing in growth.

And while we bring borrowing down, we will protect vital frontline services – in health, education and police numbers.

This means services like Sure Start – there are 20 Sure Starts in Wigan. It means the 8,148 police officers in our local police force. And it means protecting the fantastic gains we’ve made in the health service. There are now new ‘state of the art’ health centres across the borough, more NHS staff in our region than there were in 1997, and waiting times have fallen dramatically.

I believe that people in Makerfield want a government which stands up for the many – not the few. That’s why the greatest burden will be carried by those with the broadest shoulders. In contrast the Tories are cutting Child Tax Credits and Child Trust Funds for families on modest incomes so they can promise £200,000 for the 3000 richest estates.

Their plans to cut public spending and tax business investment would wreck the recovery. They refuse to tell anyone what their cuts would be in just a few months time or in the years to come. All they will say is they will cut further and faster.

Incredibly, just weeks away from an election, David Cameron is still refusing to answer even the most basic questions. How much are they planning to cut from spending in 2010/11? They won’t say. How quickly would they halve the deficit? They won’t say.

Unlike Labour, David Cameron can’t answer a single one of these questions. People will rightly conclude the Tories either haven’t got a clue what to do or they’re deliberately concealing their plans from the British people. That’s up to the Tories. In the Budget, we set out our plan. It is time for the Tories to come clean.

Yvonne Fovargue prospective parliamentary candidate for Makerfield has pledged to support the NSPCC’s ‘I stand for children’ campaign which aims to make child protection a priority for the next Parliament.

Yvonne said, “As the Labour Party candidate in Makerfield I’m supporting the NSPCC’s new campaign to ensure protecting children is a political priority.”

“We need to make sure that the next elected Government keeps child protection high on its list of priorities. By signing up to the campaign, I acknowledge the role that I can play to keep our children safe and ensure that the wellbeing of all children is a top priority for government.”

The NSPCC’s campaign is calling on candidates to commit to a range of child protection measures including:

• Making the internet safer for children
• Continued funding of helpline services for children and for adults concerned about the safety or welfare of a
child
• Tackling domestic violence from a child's point of view
• Ensuring that vital child protection reforms are fully implemented and resourced, following the death of
Baby Peter and other child deaths since
• Provision of resources for vital therapeutic services for children who have experienced abuse
• Strengthening the role of the children's commissioner in England to act as a genuinely independent voice for
children.

The Committment covers all aspects of cancer from prevention to treatment and scientific research. The Cancer Commitment calls on MPs in the next Parliament to take action in five key areas:

Yvonne said, “I am delighted to pledge my support for Cancer Research UK’s vital campaign. We all know from our own lives, a family member, friend or work colleague who have been diagnosed with Cancer. With a concerted effort from the next Parliament, we can give hope to the millions of people affected by cancer and their friends and family."

"Now that Labour's investment and reform have brought waiting lists down, I welcome the pledge that Labour will create legally binding guarantees for all patients including one-week cancer diagnosis. A future Labour Government will focus on early cancer diagnosis, giving GPs direct access to ultrasound and MRI scans, to create a right to diagnostic tests, with results, within one week." 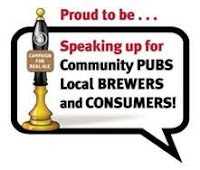 Yvonne Fovargue has today committed to:

Mike Benner, CAMRA’s Chief Executive welcomed Yvonne Fovergue’s support for the Charter, saying, “We are delighted that Yvonne Fovargue has promised to work to promote the interests of beer drinkers and pub goers. Well-run pubs make a huge contribution to community life, each of which injects £80,000 into their local economy every year. Amid growing concern over the loss of more than 5 pubs a day, it is now more important than ever to support well-run community pubs, to promote local brewers and to protect the interests of consumers.”

Speaking after signing up to CAMRA’s Beer Drinkers and Pub Goers Charter, Yvonne said, “I am proud to be speaking up for community pubs, local brewers and consumers. Well-run pubs are the bedrock of community life – they are part of the solution to the problem of alcohol misuse and not part of the problem. They deserve our support.”

For more information on the campaign visit http://www.camra.org.uk/