The Alternative Vote will be wrong for Britain 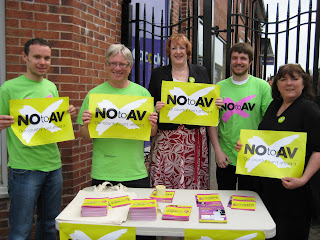 I joined opponents of a change in the voting system last weekend who held a street stall in Ashton Town Centre.

The street stall was held as it emerged that leading Labour figures across the Borough are backing a No vote in the referendum on Thursday, 5th May.

This is an important referendum – changing the voting system is not something we should do lightly. It could have all sorts of unintended consequences.

Ashton Ward Councillor, Nigel Ash said, “The Alternative Vote system is much more likely to produce
a hung parliament and the need for a coalition government. And coalition governments aren’t always the strongest. First of all it takes ages to do the deals between the parties, with politicians horse-trading behind closed doors – remember May last year.

“Because politicians make these secret deals after the election, it means that any promises they made during the campaign are thrown out of the window. Just look at what Nick Clegg and the Liberal Democrats have done on tuition fees to get a flavour. And we’re left with the crazy situation where it’s the politicians who choose who forms the government, and what policies they keep or ditch, not the voters, and that has to be wrong.”

For more info on the No2AV campaign click here.
No comments:

With the Olympics fast approaching, it’s easy to focus on what is taking place in London next year and how the North West will benefit from the legacy that it leaves. In what has been heralded as a golden decade of sport, there has been little attention paid to the first big international tournament taking place after the 2012 Games – the 2013 Rugby League World Cup.

With the majority of World Cup games taking place in the North of England, the tournament will give people from all over the world the opportunity to view top-flight sport outside London and the chance to experience the history and culture we have to offer. In doing so, it would provide much-needed income to the region.
But the North West might lose out on both games and funding; as the regional government agency that had agreed to provide funding to the tournament, the North West Regional Development Agency (NWDA), is being wound-down and it is looking to break agreements made with the tournament organiser the Rugby Football League (RFL). This has led to questions being asked in Parliament to ensure the agreed funding is in place and the UK and the North of England isn’t embarrassed by having to pull out of delivering the tournament.

I am backing Wigan’s bid to be a host town for the World Cup and have written to the NWDA this week calling on them to honour their committment to the RFL.

I don’t believe they’ve considered the wider impact this will have on the region. I know the Sports Industry Research Centre at Sheffield University calculated that the total economic activity that will be generated by the World Cup is in excess of £24m in the North West alone. When you think about how much rugby league means to Wigan and the the North West, it would be ridiculous if we were unable to have our fair share of games and lose out on that vital financial income.

The decision resides squarely with the NWDA and I am disappointed that they tried to renege on signed contracts. I appreciate that as the Regional Development Agencies are being wound up that there are hard choices to make. But I would stress to anyone involved in the decision at the NWDA on the World Cup, that this is one way they can leave a lasting legacy in the region they have been supporting for many years.
No comments:

My visit to the Guide Dogs' Training Centre at Atherton 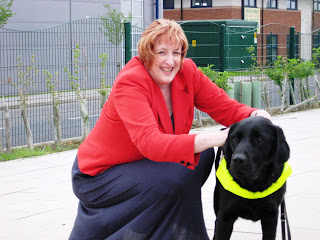 Today, I visited the Guide Dogs' Training Centre at Atherton.

As well as a tour of the centre, I also took on the challenge of a blindfolded walk with Macca, a guide dog in training, to experience the difficulties blind and partially sighted people face in getting out and about and how a guide dog can help them.

My visit follows a reception at the House of Commons about Guide Dogs’ Talking Buses campaign, which is calling for audible and visual announcements to be installed on all new buses to help blind and partially sighted people, as well as those with a range of disabilities. I am supporting the campaign.

I met with Richard Woodcraft, District Team Manager and  I was very impressed by the facilities and the professionalism of staff and volunteers. Undertaking the blindfolded walk with Macca brought home to me the vital role that guide dogs play in assisting people who are blind or suffer from partial sight loss.

A lack of information undermines the confidence and independence of vulnerable people who rely on buses to get around. Blind and partially sighted people, for example, cannot see where they are, and others including wheelchair users who face backwards on vehicles may not easily be able to identify their stop. These people risk ending up at the wrong stop. So I am backing the Guide Dogs Talking Buses Campaign. 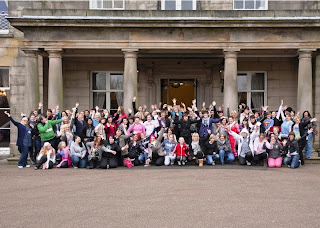 Wigan Council have kindly forwarded to me some photos from the IWD event at Haigh Hall last month.
More pics can be accessed on Facebook here.
Hundreds of young women came together to mark IWD in a unique celebrate event at Haigh Hall.
The Very Important Females event, celebrating years of youth work with young women, coincided with celebrations across the globe to mark 100 years of IWD.
The Wigan Borough event, organised by Wigan Council’s Positive Activities for Young People team, saw young women currently attending girls groups across the borough come together with other women who may have benefited from this work in the past.
I was asked to say a few words and told those attending the positive influence my Mum played in my life. My dad wanted a more traditional role for me - get married and have kids but my mum persuaded him to let me go to university and that was such a positive event in my life and opened up a world of possibilities. I did later get married and have one very special daughter!
This year’s celebration had an international feel with Alexia Papin, Wigan Council’s Ambassadress for Angers in France, also attending. Lowton Girls Group delivered workshops on sexual exploitation and urged other young women to be cautious of who they meet online and what information they share on sites like Facebook.
No comments:

The Guardian (2nd April) featured a damning report on the increasing use of sanctions as a whistleblower blew the lid on this disturbing trend.

This follows my question to the Prime Minister on Wed, 30th March on the issue of the £50 civil penalty contained in the Welfare Reform Bill.

Completing complex benefit forms is a daunting task and many people make mistakes that are in no way an attempt to defraud the public purse.To then face a £50 penalty is disproportionate and unfair. If Government Departments faced a similar fine for official error, which happens on a daily basis across the country, the exchequer would benefit from millions each year.

Off course sanctions should be imposed on claimants who intentionally defraud the taxpayer but this latest proposal shows how out of touch David Cameron really is if he believes that a mistake on a claim form is intent to defraud.

Trained welfare advisers can guide applicants through completing often very complex forms, but under proposed Legal Aid reform, access to help and assistance will be ended, creating welfare advice deserts across the country.

To read the article in full click here.
No comments: 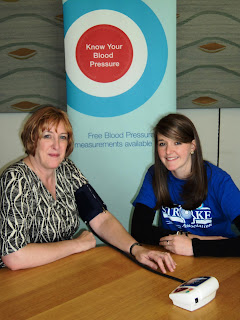 I am lending my support to The Stroke Association’s Know Your Blood Pressure campaign and am urging the people of Makerfield to get their blood pressure checked in a bid to raise awareness of the dangerous link between high blood pressure and stroke.

I had my blood pressure tested last week at a Parliamentary Know Your Blood Pressure event hosted by The Stroke Association. With annual Know Your Blood Pressure day fast approaching on the 9th April this was just one of hundreds of events which are taking place across the UK throughout the year to encourage the public to get their blood pressure checked in order to reduce their risk of stroke.

Every year 150,000 people will have a stroke in the UK, however it is estimated that 40% of these could be prevented by controlling high blood pressure.

Thousands of strokes could be prevented every year if more people took steps to control their blood pressure. Having your blood pressure taken is a quick and painless measure and it’s one that could save your life. I’d strongly urge everyone to visit The Stroke Association’s website to find out if there is an event in your local area or make an appointment with your GP to get tested.

Over the last year more than 20,500 people have had their blood pressures taken at Know Your Blood Pressure events throughout the UK.  Over 40% of people were recorded as having high blood pressure. 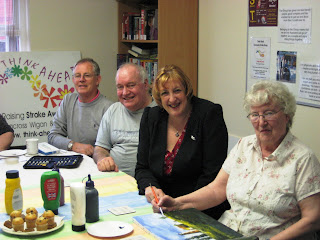 Today, I visited Think Ahead Stroke Group to see for myself the work of the charity serving the Wigan Borough.

Stroke is caused by an interruption to the blood supply to the brain which can cause a variety of long term problems such as; Paralysis, Speech Impairment, Memory Problems and Depression.

I met with staff, volunteers and stroke survivors during my visit and was impressed by the range of services and support Think Ahead Stroke Group provide.

Think Ahead Community Stroke Group plays a very important local role in shaping stroke care and support through the NHS and Wigan Council. It is the voice of stroke survivors across the Borough and provides friendship, information, advice and education as well as respite breaks and social activities.

Their long term ‘Living with Stroke’ programme provides ongoing support to survivors to help regain confidence and abilities that have been lost through Stroke via a group of dedicated peer supporters, who themselves have experienced Stroke.

Mike Aspinall, Chairman of Think Ahead Stroke Group said, “We’re absolutely delighted and would like to thank Yvonne for taking time out of her busy schedule to visit us all here at Think Ahead."

“It means so much to the team and our members that high profile members of our community, such as Yvonne, offer their support to our charity and work with us to help raise Stroke awareness across Wigan and Leigh, we look forward to seeing her again very soon.”

For more information about Think Ahead Stroke Group click here.
No comments: