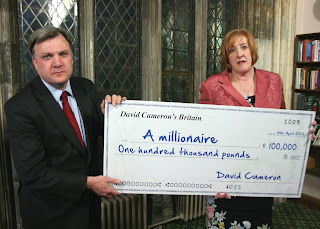 
I have joined forces with Usdaw, the shop workers union, to call on the Coalition Government to stop squeezing family incomes by continuing to cut the help they get through tax credits and other benefits.

Just days before the Budget, at a time when many hard working families are already concerned about how difficult it is to manage their finances, Usdaw arranged to take some of their members, who are being hit the hardest by the Government’s shake up of the welfare state to Parliament, to meet MPs.

John Hannett, General Secretary of Usdaw said, “Since coming to power the Coalition Government’s austerity measures have already taken hundreds of pounds out of the pockets of hard working families."

”Our members tell us, that despite working hard, it is getting more and more difficult to pay the bills, put food on the table and clothe their children”

“We are concerned that things are only going to get worse - as the Government’s flawed bedroom tax comes into force and further changes to tax credits later this year, hit almost 3 million families who will lose on average - £137 each month.”

“Next week's Budget is the Government’s chance to prove that it cares about children and families. It is time for this Government to do a U turn – stop cutting family incomes and start to support hard working families.”

I was pleased to join members of Usdaw at their recent event. Trade unions like Usdaw have an important job to do - speaking up for their members. More than one in every four children are already growing up in poverty and of those children 62%, has at least one person in their home who is employed.

Families in Wigan and around the country are getting squeezed tighter and tighter – it’s time for the Coalition Government to stop cutting and start listening to hard pressed families.

I met with Usdaw member Janette Parker who lives with her husband.  Janette works part time in a local supermarket.  Her husband was the family’s main income earner until two years ago when a long term debilitating illness forced him to give up work.  Janette is his main carer.  They live in a three bedroom house which they rent from their local housing association.  Their home has been especially adapted to assist with her husband’s declining mobility.  The couple’s son recently left home and because there are no smaller properties for rent in their local area they will be hit by the bedroom tax and forced to find an extra £1144 each year, in rent to cover the loss of housing benefit.

Janette said, "For the first time in our lives, due to my husband’s ill health we have asked for help with our rent.  But rather than helping us this Government wants to punish us by forcing us to find over £1000 in rent each year because they have determined our home has too many bedrooms. Rather than help they would rather we move away from the community in which we have always lived and worked, away from our friends and family who help me to care for my husband which saves the Government tens of thousands of pounds each year in care costs.”

Out in force for peaceful demo against Bedroom Tax


Labour Party councillors, MPs and trade unionists in Wigan took to the streets of the town centre on Saturday, 16th March to protest about the introduction of the ‘bedroom tax’.

It was one of over 50 demonstrations taking place as part of a national ‘day of action’ with similar events in nearby Ashton in Makerfield, Bolton, Manchester and Warrington.

The bedroom tax will hit over 4,700 households in the Wigan Borough who are set to lose between £14 and £25 per week. The scale of the impact of the bedroom tax across the UK which will be introduced next month is staggering;

• Two thirds of the households hit are home to someone who is disabled
• 220,000 families with children will be hit by the tax - one third of the households hit are families with children
• 140,000 working households on the lowest incomes will lose out
• Divorced parents whose kids come to stay are being affected. Grandparents will pay more.
• The DWP admit that there are not enough smaller properties for families to move to, yet the bedroom tax will still hit households that don’t have the option to move

David Cameron’s Bedroom Tax tells you all you need to know about him and his government. The government is hitting households with the bedroom tax despite admitting there aren’t enough smaller properties for tenants to move to.

Instead, the government expects families to pay extra rather than move house. This won’t solve under occupancy, but it will hit working people and some of the most vulnerable in our society. And at exactly the same time as the bedroom tax comes into effect he is giving thousands of millionaires a tax cut of £100,000 a year.

This isn’t about tough choices, it’s about the wrong choices.

Leader of Wigan Council, Cllr Peter Smith said, “The Bedroom Tax is a grossly unfair burden placed on over 4,700 Council tenants and many more in the private sector. It is designed for London’s needs so it is totally irrelevant to Wigan’s housing problems. The craziest part is that by forcing people into the more expensive private sector, it won’t save the government any money. It could only have been designed by a cabinet of millionaires living in mansions and totally out of touch with ordinary people.”

The Government have maintained that the policy will save money but cutting housing benefit to under-occupying tenants when there is no alternative accommodation will burden social landlords like Wigan & Leigh Housing with rising rent arrears and risks making people homeless. I maintain that this is wrong and risks costing the council taxpayer more. It also risks pushing people into expensive private rented accommodation, causing the housing benefit bill to rise.

A leaked letter from Eric Pickles’ Private Secretary to David Cameron’s office at No 10 revealed that the government’s housing benefit reforms could see 40,000 people homeless.

Lisa Nandy MP said, “The fact that thousands of people joined peaceful demonstrations in Wigan and across the country this weekend shows just how wrong this Government has got it."

"Their announcement on armed forces and foster families unravelled within minutes as it was revealed that they aren’t bringing forward one extra penny for the victims.

“The government announced they would exempt foster carers and some armed forces families, but there will be no extra money for councils to cover the costs.

“David Cameron’s Bedroom Tax has descended into total chaos and we will not rest until Ministers think again, admit they have got this wrong and drop this hated tax for good.” 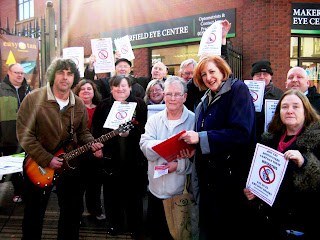 Over 500 people signed the Debtbusters petition at the event launches attended by Andy Burnham MP, Lisa Nandy MP and myself. The Ashton launch was supported by Busker, John Davies.

Wigan and Leigh Debtbusters is set to raise awareness of the detriment caused by payday lenders and others and that affordable loans, free help and advice is available through the Borough’s Credit Unions and Citizens Advice Bureau.

The campaign launch comes against a background of growing statistics that demonstrate the impact of debt on UK households. The Office of Budget Responsibility (OBR) sets out how Household debt is set to rise by 36.3% and by 2015 UK households will have amassed over two trillion pounds worth of debt.

39% of people are concerned about the amount of debt they owe and 43% think their personal financial situation will worsen in the next six months. A staggering 45% of people now say they frequently struggle to make it to payday, up by 8% since Christmas 2010. 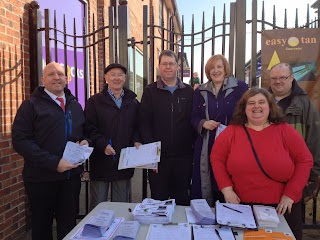 In November 2011, 16% of individuals had become ‘zombie debtors’ – only able to service the interest of their debt and not reduce it, whilst 27% had no savings at all.

One in three (32%) of those who took out a ‘payday loan’ couldn’t pay it off, so had to get another one (so called ‘rollovers’).

The high-cost credit sector, made up of payday lenders, home credit providers and hire purchase agreements, is growing rapidly and increasingly causing many of its customers to get into severe
debt problems.

Campaigners have welcomed the news that a cap on the cost of credit is set to be introduced but they warn that this is only the ‘tip of the iceberg’ and that regulation of the industry is required.

Labour and Cooperative Councillor for Astley-Mosley Common Jo Platt is set to raise the issue at this week’s full council. Cllr Jo Platt said, “Residents of the Borough are calling for action against legal loan sharks. Over the past couple of years they have proliferated in our area and the tough financial times means more and more people are turning to them and the extortionate loans which they offer."

“This motion sends a message that Wigan Council is serious about supporting our residents who are facing financial hardship. We support the introduction of a limit to cap the amount these companies can charge for loans, and we are committing to doing what we can locally to support responsible lending and discourage the loan sharks.”

Andy Burnham MP said, “A toxic mix of the rising cost of living, unemployment and wage freezes mean many Leigh households are struggling and a lack of regulation of this market by the Government means these legal loan sharks are exploiting this to push many families further into debt." 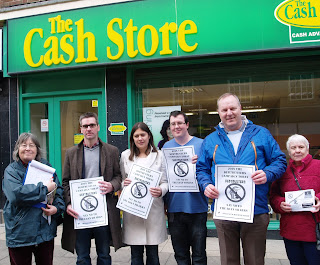 “With one in three payday loans taken out to pay off other payday loans it is clear these high cost credit products are problematic.”

I have spent my working life fighting the impact of irresponsible lending and was pleased that my campaigning in Parliament led to the announcement by the Office of Fair Trading (OFT) that they will introduce a ‘power to suspend’ payday lenders who are causing harm to borrowers.

For many people payday loans can be a sensible option and with proper financial planning can offer a product that meets their needs. However, there are far too many cases of payday lenders acting in a manner which is wholly inappropriate and loads debt onto people with no consideration of the customer’s needs – rollovers being the obvious example of this reckless behaviour.

There is an alternative and our local credit unions, like Unify and Welcome offer low cost affordable loans. Likewise my advice to anybody worried about debt is don’t suffer in silence. Wigan & Leigh Citizens Advice offer free and impartial advice to people in debt.