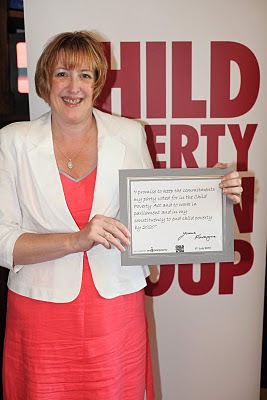 The charity Child Poverty Action Group has praised Yvonne Fovargue, the Member of Parliament for Makerfield for pledging to become a ‘Child Poverty Champion’ working in her constituency to end child poverty by 2020. Yvonne has also pledged to work in parliament on national action that will held end child poverty for all UK children.

Yvonne said, “I have signed a personal pledge to commit to action against child poverty in Makerfield and across the UK. "

“In Government, Labour enshrined into law the commitment to eradicate child poverty by 2020. Tax Credits, Sure Start and action to help parents back into work saw big improvements in tackling child poverty in local communities. This goal will be harder to meet now that the Tory/Lib Dem Government has cut Child Tax Credits and frozen Child Benefit.”

Yvonne’s comments came after a parliamentary question tabled by the Makerfield MP confirmed that:

• Over 41,000 families across the borough will see Child Benefit frozen for the next three years from April 2011
• Over 37,000 families will be hit by changes announced in the June Budget to Tax Credits

Shan Nicholas, Chief Executive of Child Poverty Action Group said, “All the main parties have committed to ending child poverty by 2020, but Yvonne Fovargue MP stands out as one of the first to have signed a personal pledge committing to action. It is important MPs understand the leadership role they can take in their area to bring partners together like local councils, schools, service providers and the voluntary sector, as well as showing public leadership by raising public understanding of child poverty in their constituency.”

“Britain has one of the highest child poverty rates in Europe and this has an appalling impact on the life chances of many children. There is no reason why British children should suffer more than our neighbours and we are delighted that Yvonne Fovargue MP is so strongly committed to ending child poverty.”