No place for animals in circuses - self regulation is not the way forward! 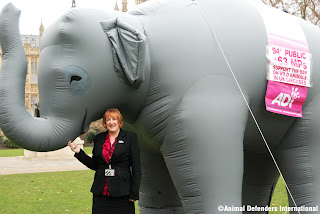 I joined Animal Defenders International (ADI) in stepping up the UK campaign to ban wild animals in circuses this week.

I pledged my support to secure a ban on the use of wild animals in UK circuses, and called on the Minister responsible Lord Henley to finally action what the UK is calling out for.

I am just one of over 160 MPs who have now signed a parliamentary Early Day Motion (EDM) 403 calling for the wild animal ban to be implemented.

I do not believe that it is appropriate for wild animals to be used to perform tricks in circuses and it is clear from the overwhelming public support for a ban that most people share that view. The only way we will see this welfare issue addressed is for the Government to implement a ban on the use of wild animals in this way. Self-regulation is not merely a poor substitute for a ban, but no substitute at all.

Jan Creamer, Chief Executive of Animal Defenders International said, “We have been encouraged by the results of our recent political opinion poll and by the results of government’s own public consultation last year that found nearly 100 per cent of the public were behind a total ban."

“It is now abundantly clear to us that public and political support for a ban on the use of wild animals in circuses has never been stronger. This process has been trundling along for over five years, and it is now time that government listened to the will of the UK people and enacted a ban.”

A recent parliamentary poll conducted by ADI found that 63% of MPs would like to see a ban on the use of wild animals in circuses and only 14% disagreed.  The then Labour Government’s public consultation in March 2010 also found that 94.5% of respondents backed a ban on wild animal acts.

EDM 403 ‘Wild Animals In Circuses’, tabled by former Defra Minister Jim Fitzpatrick MP, states there is no obstacle to a ban on wild animals in circuses and a ban should be implemented. This shows strong cross-party support for a ban on animals in circuses in the UK Parliament, and demonstrates the depth of feeling as this is one of the top number of signatories to an animal welfare EDM.

All present on Wednesday agreed that the draconian use and abuse of animals in circuses is no longer acceptable, and that self regulation of the industry, which is being considered as a viable route by the Minister, is totally flawed, as effectively the abusers themselves are being asked to self regulate.

ADI has already provided government with a wealth of overwhelming evidence from undercover investigations that graphically shows that random violence and abuse is an unfortunate part of everyday life for animals currently languishing in circuses. Both evidence and opinion is now overwhelming, and government needs to act decisively and enact a total ban.

For more information on the work of ADI click here.