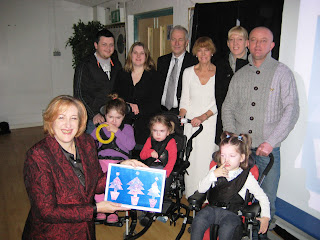 Joining me at the presentation was Headteacher, Mr Peter Dahlstrom, pupils, teachers and parents.

Now in its third year, the competition attracted entries from across the constituency with all of the designs being carefully judged by me.

The winning design will be sent to a number of distinguished people in the political world, including both the Prime-Minister, David Cameron and the Leader of the Opposition -  Ed Miliband. The card will also be sent to individuals across the public and private sector in the Wigan Borough including the Borough’s first citizen and Mayor of Wigan, Cllr Myra Whiteside.


It was an absolute pleasure to present Kacy, Maisey and Libby with their prizes. It was a great design and they have clearly hit the right note, so I’m sure people will enjoy receiving the card in the run up to Christmas.

I know everybody at Hope Special School will be very proud of them and I am too.
﻿﻿ ﻿﻿
We had a fantastic response from local schools. The children clearly put a lot of effort into their art-work so it made my job of picking the winner extremely difficult. But I’d like to thank all of the children and their teachers for taking part.

Yvonne also handed out prizes to three runners up whose designs all feature on the back of the card. Mr Peter Dahlstrom said, “I am delighted for Kacy, Libby and Maisey. It is a proud moment for Hope School that we have won such a prestigious competition.”