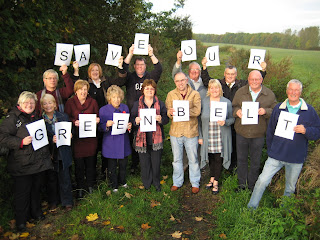 Campaigners gathered to welcome news that Wigan Council is set to confirm that there are no exceptional circumstances that can justify the release of Green Belt land for housing at Hawkley Hall and Winstanley.

In July, Government appointed Planning Inspector, Kevin Ward, surprised observers when he suspended his examination of the Wigan Core Strategy because he concluded that insufficient land had been identified (a total of 2,500 homes) for the Borough’s housing needs to 2026.

Mr Ward instructed planners to consider ‘all of the options’ for meeting the shortfall leading to green belt land having to be considered as part of the option appraisal.

• Urban sprawl would result as the townships of Ashton/Bryn  and Hawkley Hall/Winstanley moved closer together
• Brownfield and Safeguarded land should be developed as a priority ahead of green belt
• Given the quantity of safeguarded land available, no exceptional circumstances could be demonstrated for releasing green belt for housing.

I have consistently led calls for green belt status to be retained and welcome the proposals, in so far, as they relate to land at Hawkley Hall and Winstanley.

This is welcome news and a shot in the arm for residents across Hawkley Hall and Winstanley who have worked very hard during this process to demonstrate that no exceptional circumstances exist to release land from these two areas of greenbelt for housing. This is the first hurdle cleared and we must now redouble our efforts to convince the inspector to confirm this decision.

Ward Councillors have also welcomed the report to be considered by the council on 7th November.

Cllr Lynn Holland representing Worsley Mesnes said, “The Council have been placed in a difficult position by the planning inspector’s decision that all options had to be consulted upon including green belt. This has led to further stress and anxiety for residents, but I hope that going forward the inspector will do the right thing and protect these two areas of green belt.”

Campaigners are also aware of the original proposal contained within the Core Strategy to remove green belt status from land south of Winstanley for commercial development.

The proposal was subject to scrutiny at the public hearings held earlier this year which I attended along with campaigners including the M6 South of Wigan Group before the inspector suspended his examination.

Cllr Clive Morgan representing Winstanley Ward said, “We will seek to defend any attack into the local green belt. Given the availability of commercial sites across the borough this does not warrant releasing further land from green belt, nor the resulting increase in traffic congestion and impact on the quality of life of residents.”