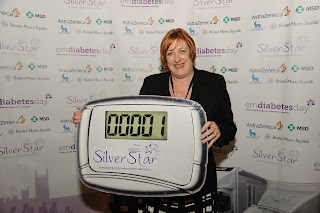 At a special MPs testing event held in Westminster, I took the quick and simple Type 2 diabetes test to help raise awareness of the need for public testing for the disease.

I was also issued with a Silver Star Pedometer to measure the amount of steps taken during a Parliamentary Week as part of the 50 day challenge.

The NHS spends £1 million per hour on diabetes related illnesses and it is estimated that more than one million people in the UK are unaware that they have the condition.

Silver Star launched in January 2007 is a registered charity campaigning to raise diabetes awareness. The Charity runs Mobile Diabetes Units (MDU) that carry out important diabetes testing. They seek to promote culturally sensitive healthcare, with particular regard to the high prevalence of diabetes in the major towns and cities of Britain. The Units travel to local community centres, schools, work places and other organisations.