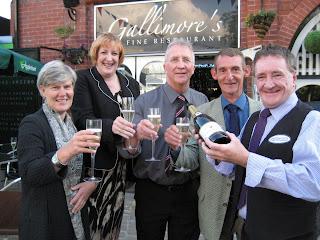 Elected to Parliament in May 2010, Kate Green MP is a passionate campaigner on child poverty and is an influential member of the Work & Pensions Select Committee. Tipped for Labour’s front bench, Kate was recently described as the most knowledgeable parliamentarian on poverty issues by the Daily Mirror columnist Kevin Maguire.

Cllr Jim Talbot, Chair of Makerfield Labour Party said, “We were delighted to welcome Kate to Makerfield and hear her thoughts on the big issues of the day. It was also an opportunity to celebrate our recent local election successes.”

As host for the event, I wanted to thank Howard Gallimore and his staff for contributing to the success of the evening. Gallimore’s picked up the Environmental Award, at the 2010 Wigan Chamber of Commerce Awards and 2011 is turning into another great year for the Winstanley Business man as Gallimore’s continues to receive plaudits for its fine food at great prices.

Gallimore's website can be accessed at the following link.