Why you should ‘know your pulse’ 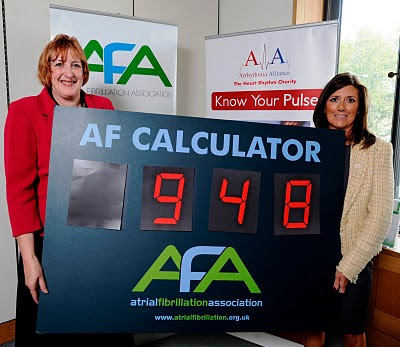 This week I have supported the campaign to help raise awareness about Atrial Fibrillation (AF), the most common heart rhythm disorder in the UK.

The campaign, spearheaded by the charity, the Atrial Fibrillation Association (AFA), aims to raise awareness of this debilitating condition and reach out to the public, parliamentarians and clinical experts.

At a meeting in Westminster, I was briefed by the AFA about Atrial Fibrillation and had my picture taken with a ‘giant calculator’ which estimates that 948 people here in the Makerfield constituency’s electorate suffer from AF.

Atrial Fibrillation (AF) is the most common heart rhythm disturbance encountered by doctors. Department of Health, 2007 figures, suggested AF affected in excess of 600,000 people in the UK. This is now considered to be an under estimate and that a more accurate figure may now be in excess of one million, with 200,000 patients being newly diagnosed each year. It is also thought to be responsible for 18% - 20% of all strokes suffered in the UK.

The risk of developing AF rises sharply with advancing age, roughly doubling with each decade of age, from 0.5% of people aged between 50-59 years visiting their GP, rising to almost 9% for those aged 80 to 89.

Simple pulse checks with GPs are a quick, and low cost way of detecting AF. That is why the AFA are today calling on people who are worried they might be suffering from AF to book a simple check up with their GP. The AFA are also calling for pulse checks to be made a routine procedure within the NHS Health Check programme and at seasonal flu vaccination clinics.

It is astonishing to think that an estimated 948 people in Makerfield have Atrial Fibrillation, and the possibility that many more have it but as yet have not been diagnosed. It is important that this condition is understood by medical professionals and patients so that they can be identified at an early stage and treated accordingly.

This is a little-known condition, yet estimates suggest that AF exerts a considerable economic toll on the NHS. For example, patients with primary or secondary diagnosis of AF accounted for an estimated 5.7 million bed days in 2008, at a cost to the NHS of £1.8 billion.”